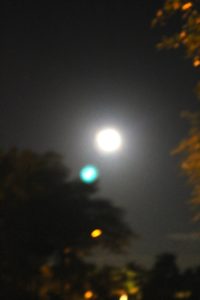 Well, nobody knows for sure what “ghosts” are, but, the theory is that they are the spirits of the once living.

A “Ghost Orb” appears as a free floating light or energy sphere that some in the paranormal field consider to be evidence of spirits or souls.  In theory, an “orb” is suggested to be a ball of energy and, therefore, should produce its own light.  Most often, ghosts, spirits, or whatever you want to call them seem to be attached to people, a location, or something in or around the location, like an article of furniture or object.

There are many theories about what different orb colors mean and interpretation of the colors varies according to different beliefs. One theory is that spirits are manifesting in the best way they can. Or, a spirit could be trying to communicate something with the color. Use your own feelings as a barometer to see what you believe the orb and its color means to you. Here are some common interpretations:

Clear Orbs
Clear orbs may be a sign that an entity is trying to communicate with you. The spirit may be trying to let the living know that some kind of significant event happened in that location, and that the spirit wants help to move on.

White or Silver Orbs
Spiritually, white or silver is associated with spirituality and connection with a higher source. Some investigators believe orbs that are either white or silver are an indication that a spirit is trapped on this plane. It may also be a sign that the spirit is there to offer protection to the people in the area. White energy is typically perceived as highly positive in nature.

Black or Brown Orbs
Many feel that black or brown colors are associated with lower spiritual vibrations or heavy energy. Some people interpret this as evil, although it isn’t necessarily the case. When black or brown orbs appear, some investigators interpret them as a sign the area may be unsafe or negative in nature. Examine such a place with caution, and if you feel uncomfortable or unsafe, leave.

Red or Orange Orbs
Red and orange colors are associated with safety and security, as well as a sense of belonging. While these warm colors are often associated with strong emotions such as anger and passion, this may not be the case when it comes to ghost orbs. Some paranormal investigators believe that a red or orange orb is a sign that an entity has assumed the role of a protector. This could be someone who was charged in life to keep watch or be a caretaker.

Green Orbs
In spiritual practice, green is associated with the heart. It is also associated with nature. Green orbs are sometimes thought to be an indication of the presence of a human spirit, as opposed to one that was never on Earth in human form. Likewise, green orbs may represent love or oneness with nature.

Blue Orbs
Blue is spiritually associated with psychic energy and truth. It is a very calming color, and many people associate it with spiritual guidance. Some people feel blue orbs are are sign of a calming presence or energy, while others feel they indicate the presence of a spirit guide in that location.