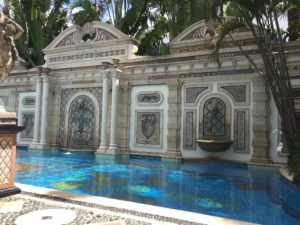 It has been 20 years since the death of Versace and the events that unfolded around South Beach.  The horror of serial killer Andrew Cunanan and the mystery behind him left the Miami Beach House on the auction block for three years without a single buyer.  An intrigued investor finally purchased the home for 19 million making it one of the country's most expensive homes and why not considering it has 10 bedrooms, 11 bathrooms, and a 24 carat lined swimming pool.

It's new owners (Martha was able to grab a photo of the Nakash Family eating dinner poolside) turned the home into lavish boutique hotel catering to the entertainment world's biggest names such as Jay Z and Beyoncé tenting the courtyard for a lavish New Year's party or Drake taking some private time to write his music in the roof top observance (see dome with blue background and shimmering gold stars) and of course Martha Horror to test the halls for any indication of hauntings!

The home has become a popular boutique hotel where guest can stay for a "mere" $1,000.00 per night.  What the hotel offers is lots of secrets and rumors left unsaid or kept hidden from the guest.  Here is what we know.

Versace although openly gay, did love his privacy in regards to the comings and goings of his male friends.  There are trap doors and secret passageways that were designed throughout the home.  Versace did have shortcuts from his bedrooms to let's say other places in the home.  One such place is what is known currently as the G Lounge.  In addition, Versace did have private viewing room to the huge Moroccan Showers that was located adjacent to the villa's gym.  It was said Versace enjoyed a cocktail with a view.

Undiscovered, even by Versace is a supposed time capsule carefully hidden within the walls of the mansion when it was built in 1930.  The hiding place  died along with the architect who installed the time capsule and died in 1937.  Perhaps some of the hauntings may be associated with some of the precious belongings from that era.

Versace used the head of Medusa as the center piece for his courtyard.  The head is made up of thousands of title and eerily looks up from the courtyard to watch over the guest of the mansion.

Versace was a bit of a clothes horse himself.  It just wasn't about making woman beautiful, it was about expressing himself as a top designer with impeccable taste.  Believe it or note twenty three thousand feet of square footage could not store his clothing.  He had hidden cubbies around the property to store his overflow of clothing.  In some rooms, guest have the privilege of storing their clothing "out of sight" as not to take away from the beautiful décor.

One of the most expensive pieces in the house that was not auctioned off is his lux toilet carved from a slab of marble and the seat and lid plated with 24 karat gold.  You can say there is seat in the house fit for a king.

Below the observatory used to be the home for Versace's carrier pigeons.  It is said he and his friends used his little pets for those intimate secret messages or invites.

Last secret of the mansion is the tile around his pool is supposed to be a secret cryptic message for all who wishes to decode.  Another case for Robert Langdon from the Da Vinci Code.

So, is it haunted.  Most of the hauntings come with the feeling for the loss of a true artist and designer.  Although Versace autopsy revealed he had contracted aides, he seemed to be turning his illness around (despite a few tiresome years and less of an entertaining lifestyle) and was predicted to live a prognoses longer life than originally expected. Who knows what the fashion world may have breathed if he lived longer.

Versace was a beloved member of the community and some of the local elders still feel his presence when they pass in front of the iron gates where Versace was gunned down while searching for his key to unlock his entranceway.  If a room is haunted it is the massive 1,174 square foot bedroom of Versace himself.  Some say he walks through the tunnels of his secret passage ways and you tend to watch those gold plated door knobs as the seemingly turn as Versace checks in for the night.

All in all an interesting experience with lots of history, mystery and an extravagance that Versace was personified. 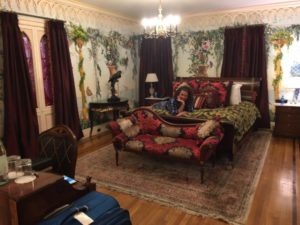 Martha hanging out in the Versace bedroom! 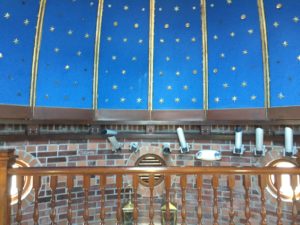 Photo of the interior of the home 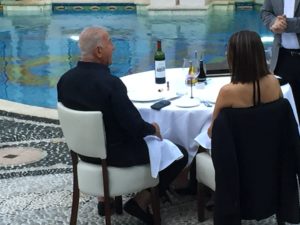