Antiques and Haunts…Arcadia FL has both!!

If you love history, antiquing and small town flavor, place Arcadia on your top ten list of things to do!  Head downtown and you will be hit with antique shops and malls from all different directions.  If you love antiques as much as Martha (that’s me), you are in collection heaven.

Every nook and cranny has history, after all the early settlers arrived way back in the 1850’s; however if you dig even deeper you can trace snippets of history dating back to 1835 when the second Seminole War began.  The Peace River natives were men of the cloth (always trying to change the Indian ways), saw mill and general store operators and of course ferry captains to transport goods.

I was so intrigued by the area, I found the last copies of Foot Prints and Landmarks I & II by local historian Howard Melton.  So, pick a building and hear a ghost story.  Let’s talk about the Arcadia Opera House.  Currently the building is an antique mall and museum with the original theater still in place with pieces from days gone by including the original balcony, an old organ, theater seats, theater posters, pieces of scenery and tarps on display and many wonderful mementoes of the old opera/movie house.  As you know I do dabble in theater, hence the Sisbarro Acting Studio on the island, so it is no small wonder I was drawn to the building and found myself right on stage exploring every corner as if I was back in 1906 when it was built.

The downtown area experienced a great fire in 1905 that literally took out most of the buildings on main street.  A John J. Heard built the theater where he housed his banking business Florida Loan & Trust on the first floor.  Upstairs he rented offices to other businesses, including the post office.  The gemstone of the building was the theater, with box office located on the second floor.  Not only was it used for theater performances, it housed vaudeville acts, black faced comedians, dances, town meetings, church and school functions, silent movies and later the talkies.

So who haunts?  There are a number of apparitions.  The most widely seen is a little girl in a frilly early 1900th dress.  This makes sense because the parents used to leave their children in the hallway to play as the adults enjoyed the show.  Nobody was watching because this little girl fell out the second story window.  John Heard himself did not go far, ghost seekers have seen a man who looks exactly like Mr. Heard  with his dark, distinguished, good looking features (full beard and mustache).  Although he left Arcadia in 1911 after he divested himself the balance of the stock to Ira J. Johnson, he and four others connected to the bank were arrested and found guilty on 43 counts.  He escaped jail by paying back all the depositors in full and the case against the bank was dismissed. Who knows, the guilt of having taken advantage of hard working townsfolk could be keeping him in toe.

The current owner of the antique mall does run “ghost nights” and claims to have many bookings for the season.  I believe you get to “hang out” in the theater from 8:00pm – 2:00am.  The owner does claim there was a suicide in the theater and a murder.  When I asked “what happened”; I was told back in the day when you had hard drinking and entertainment going on, some wild things happened in the crowd.  Someone insulted and someone settled the insult their own way. 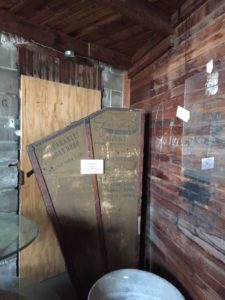 Right side backstage - Case for Harp that was used during productions 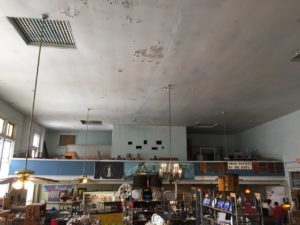 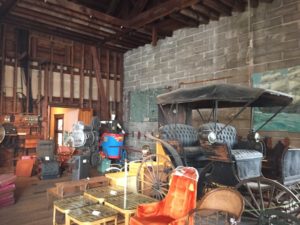 Back left hand corner is old movie reel machine to show pictures, roman figure on chariot used in play, light board switch, and on the wall a tarp from one of the original painted backdrops. 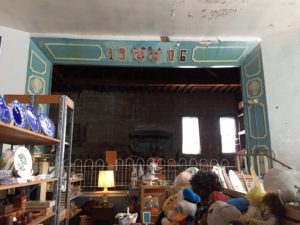 A view of the stage from the floor - notice date on upper molding 1906!