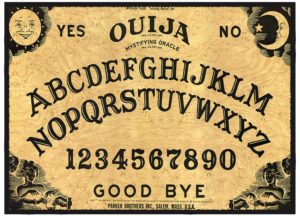 The Origin Of “Ouija”. The Ouija has been called the Spirit Board or Talking Board. It contains letters of the alphabet, numbers 0 -9, and the words “yes”, “no” “hello” (occasionally) and “good-bye” along with various symbols and graphics. It uses a heart shaped piece of wood or plastic called a “planchette. The idea is for participants to place their fingers on the planchette to spell out words. The original inventor of the board is Elijah Bond, an attorney, and an inventor of objects. The board received its patent on February 10, 1891. Although Bond was the inventor it was William Fuld who took over production of the board. Fuld was an employee of William Maupin and Charles Kennard. For unknown reason Kennard was removed from his own company and Fuld took over as supervisor changing the name to the Ouija Novelty Company. He refiled the patent only one year later in 1892 proclaiming himself as the original inventor. He was a shrewd businessman who thwarted many of his competitors who attempted to replicate the board including Kennard himself.

The Ouija board seemed to engulf Fuld and his greed to succeed This including ending his partnership with his own brother Isaac who helped develop other products associated with the board as well as a pool tables and other billiard accessories. Once he split from his brother, he made a cheaper version of the board, created Ouija Jewelry and Ouija Oil. By the year 1920 Fuld has massed more than $1 million in profit through the Ouija Trademark.

Through his millions Fuld climbed up the social ladder of Baltimore and was elected to the Baltimore General Assembly in 1924. His climb to the top is what literally took him down. On February 24, 1927, he climbed to the roof of his three-story factory to supervise the installation of a flagpole. Fuld leaned on a rail that gave way causing him to fall to the ground. On his way to the hospital, the fractured rib pierced his heart and he died on route. Upon his death, his children Catherine, William, and Hubert ran his company. In 1966, the youngest son Hubert sold the company to Parker Brothers including all it’s assets.

So, the question we ask is “Is the Ouija dangerous?” Most paranormal researches advise against it suggesting that it can be a doorway to the unknown dimensions. Religious believers feel that it may result in possession. Ghost researchers and explorers such as Martha feel that the board itself is not dangerous, but the form of communication is. The ghost who have not crossed are often confused, especially if they have met a sudden or violent death. This can result in violent, negative, and potentially dangerous conditions. When a “spirit” comes through the big caution is asking for proof of their existence. Once you ask for a door to open, a light to come on or any physical demand from them you have created a portal, a doorway, so to speak for them to come through.

If you insist on playing with the board, ask fun simple questions such as:

• Will I marry? What is his/her name? What business will I succeed in?
• Am I Grandma’s favorite? Will I be lucky at a poker table?
• Should I pursue another course of study? Who would you say is a good friend I can trust?
• Keep if fun, keep it light, keep it clean and stay pure. Never ask for someone to come to you and speak (specially an evil person in history or past life) and never, ever ask for proof of existence.