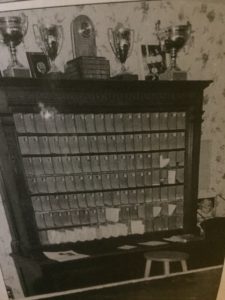 While most of you were slaving over hot stoves, making gravy from turkey gizzards and rolling out mounds of pie pastry, Martha was on a ghost haunt up north in a quaint little town called Mt. Dora, not to far (about 50 miles) from Mickey’s hometown of Orlando. If you adore antiquing, shopping in unique boutiques, lazy lakeside lounging  and taking in four star restaurants – this town was made for you. One slight problem, it’s haunted. This charming northern escape has roots that go as far back as 1840 where early settlers Jim and Dora Ann Drawdy built a cozy cabin for eight. Although Jim did not make it through the civil war, Dora remained in Florida to raise her family until her death in 1883. Ironically the same year a partnership was developed to build what was called the Alexander House, a ten room inn. The Inn was renamed the Lake House in 1895 and with the growth of Mt Dora came the growth of what is now the Lakeside Inn with four buildings added between 1903 – 1930’s. The lobby hasn’t changed too much and the most treasured piece is the wooden cabinet that sits behind the registration desk complete with pigeonholed compartments to hold incoming guest mail and room keys. By the way guest receive real keys, not swipe cards! So who is haunting. It is said two young girls. One is from the 1892 who went missing from the inn. She is said to be nine years of age and wears a red frilly dress and is believed to be Amy. The other young lady is 12 years old and wears a blue dress. She is often seen in the dining room. She tends to rearrange furniture and play with the chandeliers. In addition guest have seen apparitions of a gentleman wearing a top hat and a gangster type wearing a fedora. The big question is what did Martha see?  Couldn’t identify who however Martha’s room prankster loved to cause mischief in the room closet. Throughout the day, this hotel ghost loves to pretend they are in a disco all night long, by flashing the lights as if you were watching a strobe light show. During the day, you turn the light on, they turn it off. You turn it off…surprise, surprise, they turn it on. Every so often a cold spot near the side of the bed, just to let you know the room was not for rent. So, if you can don’t mind sharing a room with someone other than your significant other…give it a whirl for the week-end. You won’t be disappointed.